“This is incredibly disturbing to me.”

“Leo, this hamster has genetic modifications for climbing?”

“Generation 34 included some minor modifications to paw structure, yes. It’s got a lateral ‘finger’ including some primate gene sequences, and the latest generations have a limited opposable thumb.”

“Better at climbing too, as you can see, Sam. Genetropia is apparently selecting for some arboreal survival advantages. Climbers avoid predators and can reach more food sources.”

“Genetropia is selecting these gene modifications without intervention. Leo, you must be able to see how dangerous that is. It’s selecting freely from 200000 library animal genomes, and you have no idea what the expert system might consider ‘advantageous’ in the next generation.”

“Nonsense, the system will automatically discard any result that produces a disadvantageous mutation. Genetropia will only select for better, more survivable animals. We’ll end up with super-rodentia, eventually.”

“For the recent litters, Genetropia seems to be selecting for traits common to Cricetidae, possibly Rattus rattus. Our hamsteroids have developed longer tails and have been steadily gaining in size for generations.”

“Dipodomys elator, I believe, kangaroo rats may be the source of their overdeveloped hind legs. I’m not sure how much of the original hamster DNA remains, but our modified rodents appear to draw mostly from other species now. Up to five or six pounds, it’s big and it can make tremendous leaps. I’ve had to upgrade the cages several times already.”

“The modified rats are gone; apparently they’ve learned to work latches. Down into the basement, they’ve made it in the sewers. I only pray they aren’t as intelligent as I suspect.”

A prequel-tale to St. Christopher’s Movable Feast, I guess, or maybe I just found morats too fascinating. 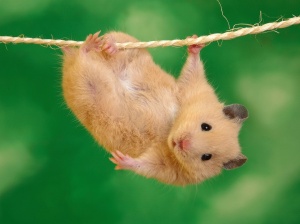 WordPress logs me out once in a  while (for reasons unknown). The only symptom is that the browser (Chrome, Firefox, whatev) suddenly can’t connect. Weird, since it connects just fine the other 364 days a year.

But the cell phone still connection works just fine…go figure. It’s only the PC browsers that this issue. Until I remember how to fix this oddity, like the last time it happened.

So I’m leaving myself a post-it note here, for reference next year: When you’re suddenly “unable to connect.”