Coming soon to an Amazon (and other sites) near you! 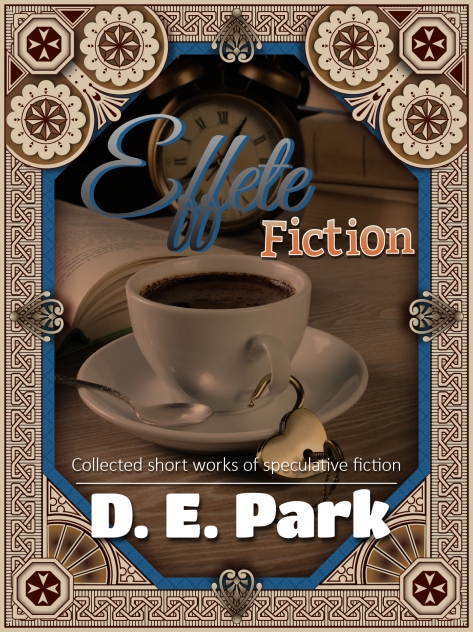 Oh no, please no, thought Tessa as she ran toward the smoking warehouse, not the chicks.

Tess dropped the key while fumbling with the office door. I’ve only had this job for three weeks, I get to deal with this? O’Malley won’t be back until Thursday. Fire alarm pullbox, hope it…good, alarm works. How far away is the nearest fire station, ten minutes maybe? Damn, I need to see about the chicks. Call 911, phoned in…the chicks!

Grab an extinguisher, Tess dashed through the offices and into the main warehouse. O’Malley’s weird little chicks are back here, where’s the fire? No sign of any fire yet.

As usual, she felt the chicks before reaching the cages. A faint, warm tickle glowed at the back of her mind, a feeling of peace and serenity. To Tessa, the chicks always felt pleasant and happy, like Home.

She’d been “introduced” to her first Weird Chick on her second day working for O’Malley. In between phone calls, it hopped up on her desk. She didn’t start at its sudden appearance, or freak out about how odd it looked—and it felt—friendly? It felt friendly at her, and Tessa felt the smile growing across her face as she reached out to pick it up.

Weird Chicks aren’t baby chickens. Tessa’s still not sure exactly what they are. Imagine a cue ball, about half size. Call it an inch, maybe inch and a half across and all warm and fleshy, slightly cooler than human skin. No eyes or ears or any features at all, no limbs—a flesh ball. It doesn’t look cute, but it somehow manages to be cute anyway.

O’Malley keeps silent on the subject of what they are or where they came from. But he has confirmed the chicks are immature. Which implies an older, “chicken/rooster” equivalent?

They are protein, absolutely, and they do taste exactly like chicken. They don’t even seem reluctant about being dinner. They line up in orderly rows for harvesting, and roll directly into the grinder, or the oven, or into the processing plant.

The chicks all gathered against the north wall of their cages, decidedly odd chick behavior. Tessa turned to look north, and saw the smoke billowing around the stairway doors.

“Time to make a run for it, guys,” she said, opening the cages.

The chicks didn’t run away from the fire. They ran toward it.

Tessa watched as the chicks rolled as a mass to the stairwell doors, and gathered against them. She felt the wave of emotion that the chicks were feeling now… Expectancy? Readiness?

Without understanding why, Tessa opened the door. A wave of heat and dense smoke rolled up out of the stairwell.

The distinct odor of fried chicken pervaded O’Malley’s for months. The firefighter could not explain where the mass of cooked meat in the stairway came from, but it smothered the fire.

485 words. Inspired by this week’s Finish That Thought (3-9) prompt (and challenge).

The “daddy longlegs” sits on a dry root, watching me with multiple prismatic eyes.

A common enough encounter, the little surveillance bots skitter everywhere in this desert. Microscopic plutonium chips power their round bodies, and they have multi-segmented legs that look very similar to pholcidae, cellar spiders.

The tiny scouts don’t take much notice of humans, as a rule. They still give me the jeebies, out here in the barrens, so I pack up my kit and prepare to move along.

A sharp buzzing draws my attention. One of the nasty hunter/killer waspbots, a “mud dauber,” swoops in on the longlegs. The two of them roll around in the dust battling, until the wasp lands a powerful electric “sting” that disables the smaller unit.

I throw my backpack over my shoulder and hike into the Omaha wasteland, while the machines continue to make war in the wreckage of human civilization.

150 words. Inspired by this week’s Picture It & Write prompt:

“It was nice of your Uncle Caius to find a room for us to stay during the Bacchanalia season.”

“Hush, at least it’s dry and warm. I’m concerned about getting sleep, though.”

Loud music pounded in from the main temple, with some very human squeals and grunts from time to time.

They both paused and leaned over to examine the large, deep pit in the center of the room. It dropped into the shadows of the temple’s sublevels.

“Not sure. Maybe it’s for some sort of sacrificial use?”

Caecilla squealed when he mock-shoved her toward the pit, “rescuing” her at the last moment.

“You bastard,” she kicked him, grinning.

“Is the wine cellar down there?”

A bacchanalia temple guard, dressed in full Legionnaire costume and obviously enjoying the party, weaved into the room from the temple. He grunted something unintelligible and raised his cantharus in salute before turning away from the bewildered couple.

He fumbled briefly with his pteruges and a yellow stream arced outward into the pit.

Angrat hated this time of year. The falling leaves did not strike her as appealing. When she did think about autumn, she could mildly appreciate its hallmarks, rot and decay.

At least one cheerful thought, fall meant things would soon get frosty.

The family had no idea that little Luigi would grow up to be. A small man, no one expected him to decide on such an unusual profession.

No one knows how he made his way to Mexico, but it might astonish wrestling fans to learn that Italian businessmen were the earliest promoters of Lucha Libre. In the 1920s, Luigi was one of the earliest and most successful luchadores in Mexico.

Decades after his death, his grandson revealed the secret of Luigi’s wrestling success:

“Grandpa was a horrible bigot. Pequeño Cerdo hated big men. He had an inferiority complex. Since luchadores are usually giants, Grandpa Luigi was in a horrific rage in the ring nearly all the time.”

“That first match he ever lost, in 1935? A crooked promoter changed the wrestling card at the last moment, and Pequeño Cerdo lost his fury strength when he faced Abejorro, the midget wrestler.”

150 words. Inspired by this week’s Monday Finish the Story prompt:

Tonight’s selected student is a big, free-striding Valkyrie, stomping back to her dorm in the predawn hours. A walk of shame, I presume. Welcoming the challenge, I slip behind her. My sturdy nylon sack cuts off her air supply and muffles the screams. She struggles but I am both strong and practiced.

In the chill of my meat locker, the patchwork masterpiece awaits. This latest Brunnhilde will complete the puzzle. I pick up my scalpel and begin modification.

Added the link to explain burking to be useful to readers.

Each of these cases holds the records of tens of thousands of men. All cross-referenced, sorted by date and location. The filing cases recede into infinity, perspective vanishing point at the limits of vision.

Most file clerks have a nervous breakdown the first time they see this filing system. Is this Satan’s own record keeping, are the earliest entries scratched Sumerian logographs on hardened clay tablets?

No, but that’s close. These belong to the V. A. Hospital.

It is a truth universally acknowledged, that a single man in possession of a good fortune, must be in want of a wife.

The man’s opinions are inconsequential, of course. What use are male opinions in social matters?

Target your avaricious intentions on his holdings, his estates, and the production of your grandchildren. The mothers pander and their daughters spin webs. Machiavellian intentions hidden behind gowns of silk and taffeta, diabolical snares constructed of garden promenades and high tea. Once attached, their lamprey teeth make them difficult to shake loose.

Exhausted by the epic struggle to maintain my freedom I resolved to flee at once. I abandoned my secure and lucrative career, only barely begun. I would find a more physical profession, and settle in a place where a man could earn his bread without the sustained shrieking of circling harpies.

Greece. The home of Zeus and Hercules, and surely the perfect spot for the ultimate consummation of confirmed bachelorhood, wasn’t it? I would get a little fishing boat and live in quiet solitude in a tiny shack. What harm if a few of the local bronzed specimens of godly manhood should stroll past on the beach? We could surely jest and contest while quaffing our wine and discussing platonic ideals. Belching, scratching, and defaming the female of the species, as real men should.

I settled on the isle Lefkada, a typical Greek island that was only unusual because of its land bridge connecting the island to the mainland. Setting sail on my tiny new boat, I learned quickly how little I knew of sailing and fishing. Fortunately, the island had several tanned and muscular youths available for hire, and I was smitten. I quite enjoyed my lessons, and soon learned both crafts. My Greek grew less insulting to the listener, as well. Adopted immigrant turned semi-native, the locals did not long fault me for my unfortunate English birth.

My occasional fishing employee and local tanned god Dimitrios introduced me to his cousin, Leucosia, a dazzling Levantine beauty in uncomfortably brief swimwear. This was surely an innocent introduction, I was certain Dimitrios knew of my proclivities. How unhappy it would make me to have my peace ruined by a ‘hook-up’—at least, if the hook-up was with her.

We drank much wine and the three of us chatted. She seemed almost human, this one, smiling and interacting without immediately shifting to predatory mode. They needed a lift to the far side of the island, and Dimitrios’ boat was down for sail repair, could I take them?

Of course, I accepted—making it clear to Dimitrios that I intended collecting on the favor eventually.

Leucosia leaned against the mast in the moonlight and asked, “You have heard that sirens have always frequented Lefkada?”

“You mean classical, mythical sirens? How do you know if they’re there?”

From behind me Dimitrios answered, “By the screams,” and his serrated teeth ripped at my throat.

495 words. Inspired by this week’s Finish That Thought prompt (the first line, from Pride and Prejudice).

Blrergharghgroan No please, not yet. Just a few more minutes, please let me sleep.

Yeah, yeah. You’re going to nag me about responsibility and shit until I get in the shower, aren’t you? My mouth tastes like litter box. That’ll motivate anybody right out of bed.

As I take off my wristwatch in preparation, I notice it’s glowing faintly blue. Wow, that looks weird. I can even see the gears whirling inside.

I fiddle with the watch stem, and I notice the sun…going back down again. Turn it forward, and the sun rises once more.

Gamers are familiar with third-person view, somewhere over the left shoulder of your avatar, staring over his back at the world. Rolling the watch stem forward, my body got dressed, had breakfast, went to work; all with me watching, a spectator. Everything was moving fast forward, a literal blur.

I watched me working on autopilot. Hah, I always knew deep down that was possible! I can stay solvent without ever experiencing the tedium. At the end of the workday, I stopped winding, and everything snapped back to normal.

The implications are enormous. I’ll finally get enough sleep! 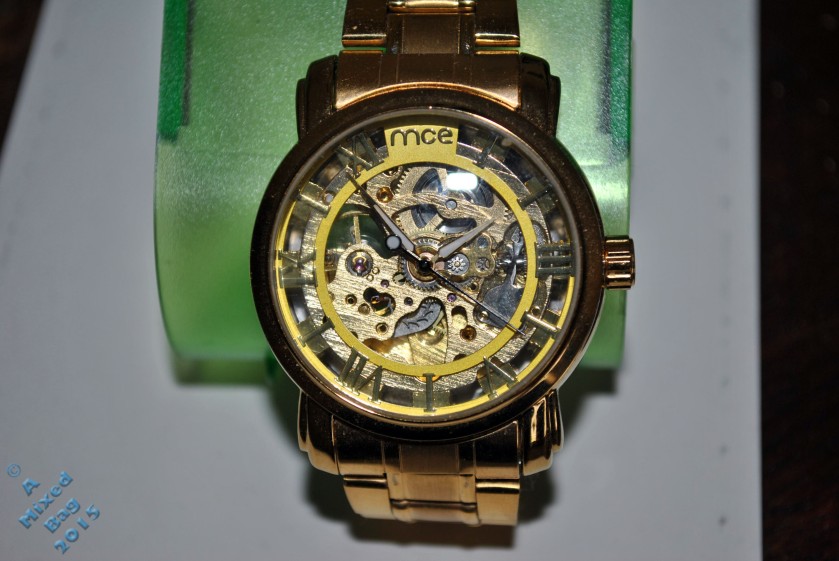