The workers climbed in the scaffolding, attempting to bridge over a small section of the construction north of Matamoros. They lacked the marvelous tools and technology of the previous century, and the wall resisted their simple hammers and chisels. Without explosives, the current plan called for going over the top, but progress was slow and food supplies short.

The Monsanto plague wiped out the breadbasket crops and worked its way into the soil and ecosystem. The dust clouds made the construction effort more difficult.

All of the remaining arable land on the continent lay south of the Folly, in Mexico.

100 words. For this week’s Flash Fiction for Aspiring Writers prompt:

They say Widow Walker stormed down to drag her husband back from the riverboat dock where the gambling and carousing went on every Friday night. She pushed grown dockhands clear off the pier into the river, the silly ones that tried to stop her, the Pinkertons and roustabouts. Then she stared down the bullyboys guarding the entrance to the Golden Nugget riverboat, and them hardened hombres backed down whining like whipped dogs. The real trouble started when Widow Walker found her husband drinking with a different painted floozy on each knee. That’s the night Haunted Pier burned to the waterline.

On Friday, everything changed. I was answering the tech support line.

“Listen, Carol Kryzinski. That’s proof of my identity. You remember what she meant to you.”

It was my own voice on the headset.

“In exactly four minutes, Carol will walk into your office. It will be the first time you’ve seen her in twenty years, right?”

“If you’d like to place a call, please hang up and dial again.”

Alexavier Shaw paced restlessly while his Expert System recounted the details of the morning’s stock trading. He was worth another billion, just another day in the penthouse.

The bar was out of Scotch, so he happily clutched the excuse to take a walk.

While returning, he encountered an anomaly; an ancient wooden door in the concrete canyon. Through it, he could see a field of wildflowers and hear birds. A circus caravan wound its way up a hillside and calliopes played in the distance.

Shaw grunted and pushed the door shut. He’d return to counting, because nothing counts but more.

“Captain, we’ve got a real problem.”

“They’re trying to cross the border again, thousands of them. Fleeing oppression, asking for sanctuary, lined up for miles on the Interstate. But shall we close the border?”

The captain climbed the observation tower and scanned the horizon. He gasped at the sheer mass of SUVs headed south. “Do we have any idea what they’re fleeing from, Corporal?”

“Best guess is the election, sir. You know how ridiculous the rhetoric became, near the end—really scary shit—intolerant, xenophobic, bigoted, and hateful.”

“According to the polls, he’s actually winning.”

“So there were gathered together a harlequin, an astrophysicist, and fifty nude women on bicycles?

“Wasn’t that a strange thing, in the Seventies?”

“Not exactly common. It made a massive outcry in the newspapers at the time, but the excitement died away quickly. The interesting bit, to me, was that the nude ladies were actually trying to win the bicycle race.”

“Florence Dollenberg, from Merton. She received a congratulatory handshake from the Prime Minister.”

“Oh, I think I see your error; the Eighteen Seventies. She was congratulated by William Gladstone.” 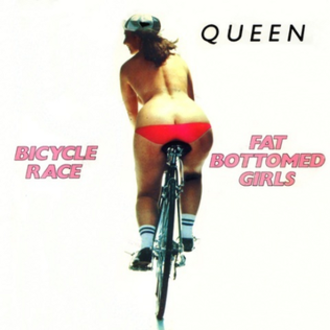 (Fat Bottomed Girls and Bicycle Race were generally played together, and flipsides of the single. Freddy Mercury is the Harlequin, and Brian May the astrophysicist. That big-wheeled bike was contemporary in the 1870s…nude bicycle racing maybe not so much.

But it coooould have happened…)

“I can’t decide when to change.”

“Come on, you know you need to. You don’t feel comfortable in your own body, you’ve told me so frequently. So this may be exactly what you need.”

“Fundamentally altering your life is always scary. I have faith in you. Just think of how much better you’ll feel after. Sometimes, you just need to take the leap of faith, you know?”

“Good, the moon’s coming up, and I can already feel the Change starting.”

“Wait a second, the full moon is tonight?”

100 words. Inspired by this week’s 100WCGU prompt at Julia’s Place:

…I can’t decide when to change…

What can I tell you? This is the greatest job.

Herding the tours onto the bus is less than spectacular, I suppose. Every group seems to have one particularly large, aggressive guy who had beer for lunch. The Family Units are all right, as long as their kids don’t scream too much.

But the pay is sweet, fifty grand per load, and it’s easy enough to drive another group out to the desert and have another “breakdown.”

You’d think they’d catch on, just from the name. “Tour Beautiful Fly Canyon.” Flies and the undead go together like helpless and tourist.

The man with the foolish grin is keeping perfectly still.

He watches the pathway leading to a portico with ionic columns and a bronze door. Before the door is a sack of homespun wool.

Hooves clop, wheels scrape gravel, and harnesses jingle. Heat and blinding radiance forces him to look away for a moment. A chariot rolls past.

The sack is now burning. He dashes forward and pounds on the door.

A figure opens the door, looks surprised,  and quickly stamps out the flaming sack.

The man with the broad grin races down the mountainside, pursued by a thunderbolt.

Sometimes when you’re chasing love, it seems like the whole world is on your side. Spring is in the air, the birds sing, and life itself dances in its most glorious poetic forms. You’ll trade anything you own for one more touch, another taste, another chocolate-caramel moment frozen in time.

They fade as the morning blossom begins to wilt, the bright petal’s edges curl and brown. Of course, there can be nothing so sweet without its tiny stings. Should we complain because roses have thorns, or rejoice that thorns have roses?

“Sure honey, whatever you say. You still need cash.”